somm, the future of wine is tech

SOMM IS A NEW TECH COMPANY—FOUNDED BY, LED BY, AND INVESTED IN BY WOMEN.

somm is the public-facing name of BeTheSomm Inc. The Canadian company is based in Toronto Ontario is founded and led by women as well as employing 50/50 investment by women/men.

somm simplifies wine. What makes somm different from other wine apps is this—it makes no assumptions about the user’s wine knowledge. Instead, in the moment, somm guides users to the best bottle for the occasion at hand.

Integrated with restaurants and store wine menus, including inventory information, to help the consumer no matter where they are, in a matter of 30 seconds or less, somm can provide a handful of wine recommendations based on the user’s inputted information. Jennifer Stasiewich is the founder and CEO BeTheSomm Inc. Her background is in neither wine nor hospitality, though she says she’s “definitely a fan of fine dining, hot new restaurants, and food and beverage in general.” Stasiewich’s background is in finance and capital markets. She spent the majority of her career on trading floors and working with the investment community.  While working for TD Securities in 2016, the bank backed her first venture called FinForum (now PureInvest). It was a start-up that connected emerging fintech players to institutional investors and venture capital (VC) companies. By 2018, she was enthralled with the tech community.

Stasiewich immersed herself with VC-backed start-ups where she leveraged relationships and turned her career entirely to the tech industry, though always with a focus on finance.

somm started as a passion project. Its origin story goes as such: Stasiewich was on the phone with her best friend who lives in Nashville. “We’d normally take a weekend trip every year, but of course with covid, we couldn’t do that. We were on the phone one night in June 2020 and my friend said she wanted to enroll in the introductory level of the Court of Master Sommeliers program. By the time we hung up, we decided it’d be a fun thing to do together during the pandemic, and we could send each wine along the way while growing our appreciation for the craft.”

As she was working through the course, Stasiewich was reminded of the complexity of the wine industry. She thought that there had to be something on the market that was designed to work the way people think about and engage with wine. Something was needed that was practical and helped take the guesswork out of wine no matter where the consumer happened to be. In the absence of anything that filled this need, Stasiewich set out to create somm—the world’s first “sommelier in your pocket” and by July 2020, the company was incorporated.

She was all in.

By August, Stasiewich had put together an initial core team and shortly thereafter raised their first round of capital with a strategic group of angel investors from the hospitality, venture and finance community.

In December 2020, somm officially launched on iOS and Android across Canada and the company is continuing to aggressively grow its reach, user base, features and national partnerships.

Stasiewich was and is business-first. Her experience in capital markets, fintech, and relationship management led her to somm. She saw a need, made a plan and assembled a team. There are about 14 people involved in the company, some contractors, third-parties and employees. “It’s just fun to be in the position to bring in people who are all rowing in the same direction,” says Stasiewich.

Stasiewich’s team includes some of Canada’s leaders in hospitality, wine and tech.

Yann Le Guillou is Alo’s former GM. He now manages partner relations for somm. Stasiewich got to know Le Guillou around 2016 when she launched FinForum since all of the company’s private events would take place at Alo. Le Guillou took care of those events and her guests. He was attentive and wonderfully detailed. Says Stasiewich: “We had a rapport, stayed in touch and he had a tremendous Rolodex of people he knew in the industry.” Stasiewich told him about her idea in the wine space, and Le Guillou was the first-ever employee for the company.

Next Stasiewich needed developers: “We needed the app to not just be an idea.” Having worked with start-ups in the past, Stasiewich knew some seasoned tech pros from some of Canada’s tech darlings like Shopify, Wealthsimple and Delphia. They too were in, giving her another boost of confidence.

Then Jordan Mazzanti—sommelier at Langdon Hall—was in. Stasiewich says Mazzanti is “everything wine isn’t—funny, casual, irreverent, real, knowledgeable and progressive!”

Elyse Lambert is somm’s master sommelier in residence. With only five master sommeliers in all of Canada and one of the only women master sommeliers in the world, Stasiewich was particularly excited by the opportunity to have not only another strong woman at the table but a revered expert. “Elyse is an incredibly beloved and coveted professional in the wine industry and she too believes that wine is ultimately about enjoyment—and the more we can get people appreciating wine without all the fluff and pretension, the better.”

While somm is initially focused on building consumer confidence in choosing wine and helping its users discover unique wine merchants, Stasiewich and team are spending a lot of time building great tools to help hospitality partners and restaurants better engage with their guests. An example is tableside tech, where servers who aren’t fully versed in wine (nor should they have to be), can use an enterprise version of the software while serving their tables. “The reality is that not everyone is a sommelier, not every restaurant has a Sommelier, and not every guest wants to speak to a sommelier—sometimes they can be rather intimidating. But everyone wants to enjoy great wines that are perfect for their culinary experience.

“Whether it’s our intuitive digital menus or tableside tech, we are building somm to work for the future of hospitality. And Sommeliers like it too – we elevate the guests’ baseline level of knowledge which allows for a Sommelier to have a more engaging conversation with a more confident guest, and speak to diners who may have otherwise been overwhelmed or uninterested,” explains Stasiewich. 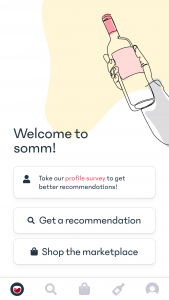 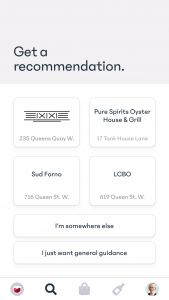 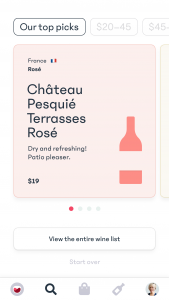 From a Marketplace perspective, the main value proposition is that partners can drive net new sales and gain market reach. And there’s a lot of flexibility in the economics “We want to form good, real, and long-lasting relationships with our partners and in doing so, we try to really understand their business and margins so that we can create something that is sustainable and mutually beneficial,” says Stasiewich.

From the Consumer’s perspective, the point of Marketplace is to help users discover unique merchants of wine. The typical retail consumer buys most of their wine at the LCBO in Ontario. Consumers know they can go to wineries, but most don’t know wine agencies exist. “There is so much more out there than just the LCBO,” says Stasiewich. somm allows consumers to access this whole other world of wine, “outside of the big box.”

The app’s initial marketplace started in Ontario, but Stasiewich is already building new avenues with folks in Alberta, Quebec and BC to expand the marketplace as quickly as possible to those provinces. “Interprovincial regulations might be changing, which is extremely encouraging and we want to anticipate and be prepared for that major changes. Hospitality has been forced to embrace technology, now is the time to embrace real change,” says Stasiewich.

For consumers, somm will soon unveil two paid versions of the app “Premium Cru” and “Grand Cru” where subscribers will have access to secret menus, exclusive products, loyalty rewards, and virtual events (and eventually physical events) featuring their partners. Grand Cru will also include a rotating selection of wines from their partners, delivered to the subscriber’s home each month offering subscribers the most diverse, high calibre, locally connected and cost-effective wine club on the market.